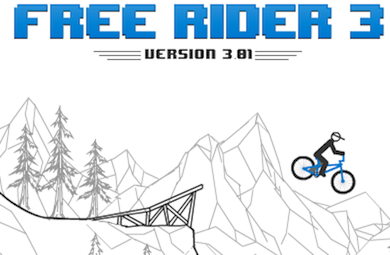 Free Rider 3 same way as SSF 2 features a rating system for its custom user created levels, allowing you to play the most popular levels with ease and enjoy the best the game has to offer without wasting time on poorly created user tracks. Not happy with simply playing other peoples courses? Feel free to use the built in level editor to create your own artistic masterpiece, or maybe just a cruel track with as many traps as possible to ensure only the most hardcore players can compete it, your level could be up-voted to the top of the level list and played by millions of players all over the world, so enough reading and get gaming! Try another funny card game World of Solitaire for free.

P.S. Another trending game is unblocked Flappy Bird, it has even battle royale mode now 😀